“Asking an interpreter a question is like taking a drink from a fire hose.”

One of the folks you might meet when visiting the Oregon Trail Interpretive Center is Park Ranger Jeremy Martin. One of the many duties of a park ranger here is interpretation. Jeremy provides a variety of programs and research and writes educational materials. He provides front line customer service to visitors, mentors seasonal staff and volunteers, and answers all kinds of questions from the public.

He went to college for forestry and worked for several national parks including Great Smoky Mountains, Carlsbad Caverns, Wind Cave, and Sequoia and Kings Canyon. He started working at the Oregon Trail Interpretive Center four years ago. “This job allowed me to explore and teach more human history.”

“People tend to think of the Oregon Trail as one dimensional and tragic. But 90 percent of the people who started the trek made it to the Willamette Valley. They started new lives. I like to bring it into modern perspective. People have thought of the Oregon Trail as a lone wagon blazing a trail across a virgin continent, but by the 1850's, it was a mile wide, 2,000 mile long junk yard. There was trash and dead animals. It was dirty. There were even vendors selling goods along the way, especially at well known camp sites such as Independence Rock and Fort Laramie. It was hot, dusty work with lots of people.”

Center staff create all the interpretive programs here. “It’s not a script or a play. It’s a message. There’s a reason we're telling the story. It’s to answer the questions: Who cares? Why is this important to the listener? The stories I like to tell are more offbeat. A story lying there under the surface. We have a lot of diaries to pull from, and many of them document the day to day life on the Trail. I'm more interested in the eccentric.”

Two of Jeremy’s program use living history – based on true-life characters: mountain man Joe Meek, and pioneer horticulturist Henderson Luelling. “When I’m doing Joe Meek, people light up because they may have read about Joe. I even got to meet one of his direct descendants. I also got to meet some of Henderson Luelling’s descendants.” Luelling brought the first grafted seedling fruit trees along the Oregon Trail. Many fruit trees in the Northwest today originated from his trees. “He was a vegetarian on the Oregon Trail. He brought his wife and eight kids on the trail. His wife gave birth on the trail. He brought two full wagons of saplings on the Oregon Trail. It was said that he took better care of his trees than he did his own children, and even called his trees ‘his little darlings.’” 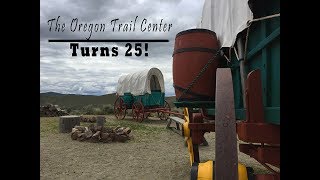